Nearly a century ago, Robert Marchand was told by a coach that he should give up cycling because he would never achieve anything on a bike.

On Wednesday, he proved that prediction wrong. The 105-year-old Frenchman, made cycling history by covering 14.08 miles in one hour on a track near Paris.

Marchand, who has a huge following in France, and was cheered on by hundreds of fans as he rode round the velodrome at Saint-Quentin-en-Yvelines.

I wish I had given that answer the last time I fell down some stairs (on May 7, 2015 in the Luisenhof in Dresden, Germany).  Dick Van Dyke, 90, last summer, in a hotel, tripped and tumbled down a long marble staircase.  In his words, “everyone ran over to see if the old guy was okay.”  But he was fine, just laughed and said, “Relax, everybody.  I do this for a living.”
Here is more on how Dick Van Dyke is doing it:
http://www.chicagotribune.com/lifestyles/health/sc-hlth-1021-dick-van-dyke-aging-20151013-story.html

More than $200,000 (£150,000) has been raised online in days for an elderly Chicago ice popsicle vendor who was pictured struggling to push his cart.

Fidencio Sanchez, 89, was forced out of retirement in the summer after his only daughter died and he took custody of her children.

The GoFundMe page was set up by a stranger who was moved to see the paleta seller hunched over his trolley.

Despite the windfall, Mr Sanchez says he has no plans to stop working. Read More 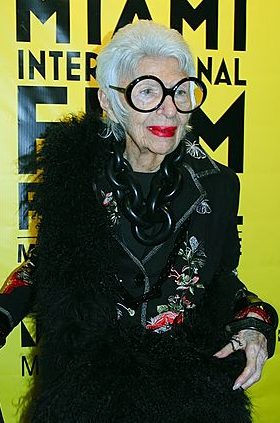 “I just I love what I do. I work very hard. I think hard work is my medicine, my salvation,” Apfel says at the launch of her partnership with the Macy’s brand INC International Concepts, called “Iris Meets INC,” in New York City earlier this week. Read the full Story