Everybody knows that people who see themselves as victims of circumstances beyond their control can be anxious or easily depressed, while those who own up to whatever they are doing or going through usually are not.  And more than that: individuals in charge of themselves are able to deal with even serious stress and strain in a superior manner which, as a result, is more likely to lead to better outcomes.  Plus it gives them the opposite of anxiety and depression, i.e., relief and satisfaction, even pleasure.

Of course, this can look complicated, particularly in the appropriate relationship of man to woman, although it really isn’t so.  Because in the end we are all related.  It’s just a matter of degree how close that relationship can be, and time frame and location are all part of it.  Let me explain.

You see, it’s our spiritual, religious, political, and other grand ideas which shape and twist our view of what’s going on, while my suggestion, as mentioned before, is simply to apply a common sense approach.

I started this treatise with a controversial position which does exist in our society today in respect to the morally correct relationship between man and woman, particularly in respect to mature people. Now I need to note that the “proper” relationship between man and woman is seen in a chaotic array of ways in different societies, each one of which firmly believes in its own practice as being the only true one.

Let’s return to one of the earliest human society forms again, the hunters and gatherers, of which there are still a few isolated groups in the world. The woman was – and where they exist, still is – pretty much an equal of the man in most respects.  Marriage between one man and one woman, however, is not common.  They may be partners for a while, but somewhere along the line they partner with different people.  They do this for many reasons, most of them having to do with being able to produce and bring up healthy offspring.

As all kinds of religions were created, and specific concepts and rules were developed of how that relationship between man and woman should be.  Here I am not going to give anything near a complete list of these options which have come into existence worldwide.  Again, that could fill a very thick book, which someone else might already have written or someone may write eventually.  Here I will merely pick a handful of examples which readily come to mind.

Muslims allow their men to have up to four wives.  And, from what I’ve seen, all parties appear to be happy with that solution.  Allah approves, maybe even prescribes it.

Mormons can essentially have countless wives, all at the same time.  Mormon leaders have acknowledged that the church’s founder and prophet, Joseph Smith, took as many as 40 wives, some already married and one only 14 years old.

Christianity, by and large, through its many different churches, proclaims that marriage between one man and one woman is a one-time affair, “from now until death do we part.”  Yet in actual practice, couples do get divorced and then remarry, some of them several times. Thus they end up with multiple relationships throughout their lives, although each one of them may be a one-man-to-one-woman relationship at the time.  Also I have seen that marriages get annulled, at times many years after they had been entered into, and the individuals involved were then treated as if they had never been married.

I’ve seen ethnic minorities in China (at the time of my visit there were 54 of them), some of them outside Kunming in Yunnan Province, a few of which are maternal societies. One in particular where the woman-man relationship is somewhat like the Mormon concept, except that it is the woman who is the head of the family and may have many husbands, or quasi-husbands, who in turn may serve several families.

Looking at all of this from a common sense perspective, I see two forms of man-woman relationships as being sound, healthy, just, and working out alright:

If a person is a firm believer of a certain religion or view of the world, as well as in that belief’s particular rules, then it makes good sense to live by those rules and obtain happiness as well as salvation therein.

Physically, mentally, and spiritually, the relationship can be only one-to-one between one man and one woman. And to deepen that experience, which means becoming more of ONE true couple in all respects, the relationship will be exclusive.  There won’t be any other wives or concubines, unless the woman WANTS to be only a part-time partner, and the man is prepared to be responsible for that part-time partner to the same extent as he would be to one partner.

All of this would need to be applied to the time frame the two partners are really living together; not to after they separated, intentionally or by death, or if they were permanently in different locations.  In other words, a healthy, God-given, man-woman relationship is possible and desirable when the two are there for each other exclusively, in the same place, at the same time.  Common sense tells me that this way true happiness can be found, not to mention that difficulties are easier to overcome and relationships with the rest of the world are strengthened. 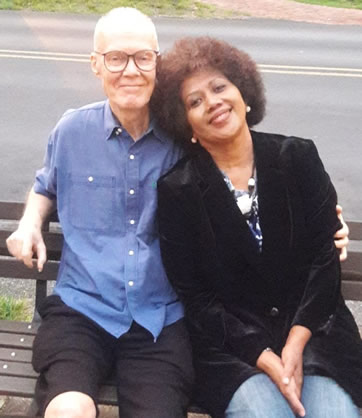 Why is it important to see this clearly?  Because the wrong expectations of what we ought to do and how we should behave, particularly at a certain chronological age, easily leads to disastrous misjudgments and decisions which can very negatively impact our lives.  Instead the answer is to work, live, think, love, and give of yourself – NOW.  Don’t be judgmental, and do something for a better tomorrow instead of having any expectations of it.

Yes, this is a “later stage of life” story.  But the story is not finished – it’s as alive as it has ever been and it will continue to be so until the day it is not. How does anyone know that today, or tomorrow, could not be the end of his or her life, regardless at what age this happens to be? That’s why you need to live TODAY without fear of tomorrow, as practically all living beings do, for that’s the only way to fully live, share, and enjoy this incredible life here in this world.